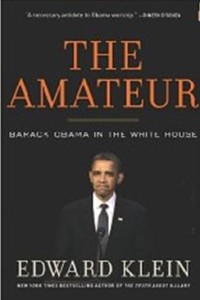 When elected as the next President of the Unites States in 2008, Barack Obama seemed to many like a political messiah – and in Germany his positive image has never been contested in earnest. Stateside, however, things have radically shifted, as not just Republicans but many of his erstwhile followers have adopted a harshly critical view of him. Edward Klein now wrote a highly critical and much noted book about Obama that made it to the top of the New York Times best seller list. Klein himself is the former foreign editor of Newsweek and served as editor-in-chief of New York Time Magazine.

Obama, as one of Klein’s arguments goes, suffers from megalomania that has kept him from rising to the challenges of his office as US President. But he has had the megalomaniacal state of mind for a number of years now, Klein believes. He agrees with an old acquaintance of Obama’s from his days in Chicago, whom he quotes with the following assessment: “He is afflicted with megalomania. How else can you explain the chutzpah of an obscure community organizer who began writing his autobiography before he was thirty years old—and before he had any accomplishments to write about? And how can you explain the chutzpah of a first-term United States senator, who believed he was qualified for the most difficult job in the world—the presidency—even enough he had never held a real job in his life?” (p. 3). In the author’s opinion, Obama has a “messianic complex—meaning that he believed he was destined to become America’s savior” (p. 62).

He admits that there have been other US presidents who entered the White House as “amateurs” – one of them John F. Kennedy, for instance (p. 81). However, he argues, these other presidents had quickly grown in office. The followers of Obama argue that he, too, has grown in office – and that he will therefore not repeat many of the mistakes he made during his first term (p. 230). The author begs to differ, saying that while Obama may be an excellent presidential candidate he lacks a number of essential qualities necessary for the presidency. Moreover, he chose unsuitable advisors, as Klein demonstrates with several examples (pages 86, 94, 99, among others). He adds that the influence of Obama’s wife Michelle is systematically underestimated. She plays an even bigger role that President Clinton’s wife Hillary did at the time – except that the Clintons were quite open about the fact whereas the Obamas are not (pp. 105+).

One of the key hypotheses of the book is that Obama not only failed to systematically maintain relations with his former sponsors and supporters, but repeatedly alienated them. One of the many examples cited is the well-known and influential TV hostess Oprah Winfrey, who had counted among Obama’s most important supporters during the 2008 presidential campaign. She even accepted the fact that her approval rates among her viewers and the advertising revenues for her show had taken a nosedive as a result. Soon after the election, however, Obama and his entourage had given her the cold shoulder, Klein writes and backs his argument by recounting a number of episodes (pp. 137+). This is true not just for Winfrey but for a number of groups and personalities who had supported him in 2008. “For many of them, disillusionment has replaced the old fire in their belly. Three and a half years of aloofness, noncommunication, and dithering amateurism by the president left his old shock troops in a state of shock” (p. 145). The author wonders whether Obama’s campaign staff will succeed with their ongoing efforts to mobilise these groups for the upcoming presidential elections, and he has his doubts. “President Barack Obama’s Chicago-based reelection campaign has a hometown problem“, Klein writes, quoting American journalists, „the donors and volunteers who have lost interest after launching his run for the White House four years ago” (p. 160). The author goes on to say that he also lost the trust specifically of those parts of the American public that had been particularly enthusiastic in their support in 2008. There has been massive disappointment among the Jewish voters (pp. 155+), he argues, citing two reasons: One, the Israel policy of Obama, and second, his pronounced dislike of the business community, especially of the Wall Street crowd. What he finds most amazing, though, is that even Afro-Americans are seriously disappointed by him (pp. 183+).

Then again, he does not rule out that Obama might be reelected anyway. If so, he muses, Obama will enter the history books “as a transformative president who turned America into a European-style democratic-socialist welfare state” (p. 4). He objects to the idea by saying that he surely was not voted into office to turn the United States “into a European-style quasi-socialist country in which the state controls economics and social matters” (p. 61). Obama, he argues, “believes that he was chosen as president to save a wayward America from its dependency on free-market capitalism. This has led him to push clumsy and unpopular far-left policies—universal healthcare, Wall Street bailouts, cap and trade, green jobs, and renewable energy—at the expense of rational policies aimed at putting America back to work” (p. 83). Klein admits that the President continues to get a lot of support, especially from the media – then as now. Klein quotes from another book that discusses the relationship between Obama and the media, which states that “mainstream journalists always root for the Democrat. But this time it was different. This time journalists were not satisfied merely being partisan witnesses to history. This time they wanted to be real players and determine the outcome. This time they were on a mission—a noble, historic mission, as far as they were concerned. In fact, I could not remember a time when so many supposedly objective reporters had acted so blatantly as full-fledged advocates for one side—and without even a hint of embarrassment” (p. 49).

Indeed, Klein quotes embarrassing comments from quite a number of renowned journalists, including by Chris Matthews of the MSNBC: “I’ve been following politics since I was about 5. I’ve never seen anything like this. This is bigger than Kennedy. [Obama] comes along, and he seems to have the answers. This is the New Testament” (p. 63). Or take Newsweek editor Evan Thomas: “In a way Obama is standing above the country, above the world. He’s sort of God. He’s going to bring all the different sides together” (p. 63). Here is what film director Spike Lee had to say: “You’ll have to measure time by ‘Before Obama’ and ‘After Obama’ … Everything’s going to be affected by this seismic change in the universe” (p. 63). R.Z.