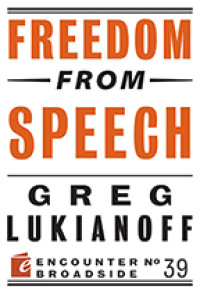 The author of this so-called broadside is regular columnist for the Huffington Post, but also writes for the New York Times, the Washington Post, and the Wall Street Journal. He critically discusses a trend in the United States to undermine the “freedom of speech” protected by the First Amendment. He focuses particularly on US campuses because these should be models of tolerance and unfettered intellectual debate.

A recent phenomenon he cites – and this may still be more or less alien to European readers – involves so-called “trigger warnings.” What does that mean? There appears to be a nascent tendency among student to demand from professors to issue express warnings ahead of any lecture or class that could contain emotionally upsetting discourse. Such contents ought to be labelled in analogy to the warnings commonly found on cigarette packs.

The background is this: Originally, the idea was to protect people suffering from post-traumatic stress disorder (PSTD). This sort of syndrome is experienced by individuals in the wake of traumatising events, such as war or rape. However, the term became subject to inflationary use, and things have now come to the point where anyone confronted with opinions that seem political incorrect may feel traumatised. University professors are expected to realise “that sexual misconduct is inextricably tied to issues of privilege and oppression,” which in turn brings in “racism, classism, sexism, heterosexism, cissexism, ableism, and other issues of privilege and oppression” (p. 42).

One example for something that upset students was the statue of a sleepwalking man in underwear that had been set up on a certain campus. Students saw the statue as “a source of apprehension, fear, and triggering thoughts regarding sexual assault for many members of our campus community.” They petitioned that the statue be removed, arguing: “We really feel that if a piece of art makes students feel unsafe, that steps over a line” (p. 46). How exactly your personal sense of safety is compromised by the statue of a somnambulist remains anybody’s guess.

The author’s critique goes like this: “To those who value intellectual freedom, however, trigger warnings are yet another manifestation of the attitude that society must protect every individual from emotionally difficult speech. It is impossible to live up to this expectation, and in the course of trying to do so, we risk devastating freedom of speech and the open exchange of ideas… When students take advantage of a psychological term developed to help those traumatized in the ghastly trenches of World War I justify being protected from The Great Gatsby, sleepwalker statues, and, as the Oberlin policy specified, Chinua Achebe, it becomes clear that there is virtually no limit to the demands that will be made if we universalize an expectation of intellectual comfort” (p. 57).

Generally speaking, Lukianoff has diagnosed a trend toward intolerance at American universities. He mentions the rising number of instances in which dissenting speakers who have been invited for talks are “dis-invited” again. He counted 257 incidents (and this is surely not a complete list) of speaker invitations that were revoked as a result of student or faculty pressure. The trend has been particularly hard on conservative voices, with 118 of them disinvited whereas left-leaning speakers were dis-invited only 61 times (p. 32). The ratio is all the more remarkable because campus invitations to conservative speakers are less frequent anyway. In the years 2013 and 2014, for example, not a single Republican speaker was invited to speak at one of the top 30 university or at the 30 leading liberal arts schools – whereas 25 Democrats were invited during the same period of time (p. 32).

Lukianoff goes on to show that intolerance is hardly limited to campuses. Scandals are constantly cooked up in the media because someone made a joke and a remark that was less than politically correct. The person at the centre of the scandal will invariably have to apologize to those he or she upset, no matter whether the remark was made in private or in a state of inebriation. It is not infrequent that such persons end up losing their jobs. “Admittedly, many of the offending comments were not particularly sympathetic, but the public’s appetite for punishing attempts at candor gone wrong, drunken rants, or even private statements made in anger or frustration seems to be growing at an alarming rate” (p. 2). The movement to enforce a “zero tolerance” policy in regard for anything anyone could deem offensive is gaining momentum (p. 3).

While Lukianoff concedes that these attempts to curb the freedom of speech tend to come from the political left, he emphasises that conservatives are no strangers to the phenomenon. Accordingly, his broadside aims not just at the left: “If we characterize the push toward censorship as a phenomenon that comes from only the left, we automatically let half the population off the hook and demonize the other half, many of whom may potentially be allies in the fight for free speech.” (p. 24) R.Z.