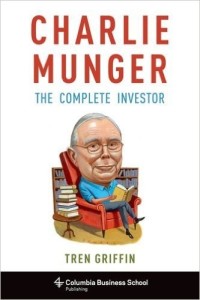 Numerous books have been written about Warren Buffett over the years and he is firmly established as a renowned figure among investors all over the world. In contrast, not so many authors have focussed on Charlie Munger, who has been Warren Buffet’s partner for more than five decades. Griffin’s book closes that gap. The book is definitely worth reading, particularly as it encourages readers to reflect upon their own investment strategies.

Munger is famous for being a voracious reader. His children once drew a picture of him as a book with legs. He apparently reads a complete book every single day and his interests cover almost every conceivable subject area. He is a firm believer in extensive general knowledge and is convinced that a multidisciplinary approach is more rewarding than specialized expert knowledge.

Munger recognizes that investing involves much more than just numbers and calculations. “People calculate too much and think too little”, is one of Munger’s maxims (p. 46). Every investment decision involves a large number of immeasurable and unquantifiable factors. “You know, they’re important, but you don’t have the numbers. Well, practically everybody overweighs the stuff that can be numbered, because it yields to the statistical techniques they’re taught in academia, and doesn’t mix in the hard-to-measure stuff that may be more important. That is a mistake I’ve tried all my life to avoid, and I have no regrets for having done that.” (p.45).

It is indeed striking when you consider the extensive and wide-ranging educations enjoyed by many extremely successful investors – George Soros or Jim Rogers, for example, studied philosophy and history. They spend more time thinking than they do rushing to apply widely-accepted financial and mathematical systems. Again and again, Munger emphasizes the incredible benefits of life-long learning. And his definition of learning is nothing more than being open and ready to adjust your previously held opinions and ideas. “Munger likes to say that a year in which you do not change your mind on some big idea that is important to you is a wasted year.” (p. 61)

You also get an idea of the range of Munger’s reading from his frequent talks on the findings and insights of behavioral economics. The book’s most in-depth and detailed chapter is devoted to the “Psychology of Human Misjudgment”. The chapter itemizes a total of 25 biases that have been identified by behavioral economic’s researchers. One of the most costly tendencies is to deny reality; ignoring, distorting or downplaying negative situations: “One should recognize reality even when one doesn’t like it,” said Munger. That might sound banal, but a majority of people think and act very differently. “The reality is too painful to bear, so you just distort it until it’s bearable. We all do that to some extent, and it’s a common psychological misjudgment that causes terrible problems.” (p. 71) What Munger says fits well with my own observations: “Failure to handle psychological denial is a common way of people to get broke.” (p. 71)

This is strongly linked with the “Overoptimism Tendency” (p. 74), which leads many investors astray. An eagerness to think and act in conformity with those around us (“Social-Proof Tendency”) is the root cause of many misjudgments.

Many of the mistakes listed here have been widely documented in the literature. It is clear that Munger studied and analyzed the relevant literature intensively, using it to draw conclusions that would be relevant to his investment philosophy. Somewhat more surprising is that Munger also lists alcohol and drug misuse as common factors behind misjudgments. “Three things ruin people: drugs, liquor, and leverage.” (p. 81) Munger speaks from his own experience: “The four closest friends of my youth were highly intelligent, ethical, humorous types, favored in person and background. Two are long dead, with alcohol a contributing factor, and a third is a living alcoholic – if you call that living. While susceptibility varies, addiction can happen to any of us, through a subtle process where the bonds of degradation are too light to be felt until they are too strong to be broken” (p. 81 onwards). Alcoholism, according to Munger, is a major reason for people’s failures in life. (p. 82)

In the fifth chapter, The Right Stuff, the author considers the attributes that a successful investor needs to possess, as identified by Munger over the years. Here are a few that are mentioned:

On the subject of risk aversion: Many investors make the mistake of believing that investments in “high-quality businesses” are inherently less risky. But price is the most important factor. “Most investors”, says Munger, “think quality, as opposed to price, is the determinant of whether something’s risky. But high quality assets can be risky, and low quality assets can be safe. It’s just a matter of the price paid for them… Elevated popular opinion, then, isn’t just the source of low return potential, but also of high risk.” (p. 118)
Another major factor behind successful investments is for investors to recognize the limits of their own aptitudes. Munger and Buffett have turned down lots of investment opportunities because they were too complicated and outside their circles of competence. Anyone who doesn’t know the limits of their abilities is in truth incompetent. (p. 122) You should be particularly skeptical when presented with a catchy, plausible sounding, “investment story”. A number of the biggest frauds in financial history resulted from the fact that the fraudsters – such as Bernie Madoff – were great story-tellers (p. 123).
When an opportunity presents itself, a “fat pitch” as Munger calls it, you need the courage to strike quickly and invest big – it is widely known that Buffett and Munger eschew vast diversification, believing instead in the value of holding a concentrated investment portfolio. The secret of Munger’s success can be summarized as follows: “The wise one bets heavily when the world offers them that opportunity, They bet when they have the odds. And the rest of the time, they don’t. It’s just that simple.” (p. 130). R.Z.