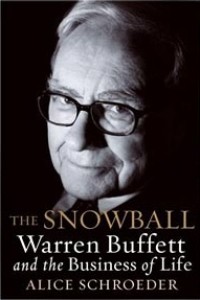 This is certainly not the first Warren Buffett biography I have read – yet without doubt it is both the most voluminous and best one. It contains more information on the life of the most successful investor of all times because Buffett himself provided the author – unlike other biographers – with a wealth of information in the course of numerous personal interviews. For the first time, a biography affords a detailed angle not just on Buffett’s investment philosophy, but also on his private life and his personality structure.

This “inner system of coordinates” helped Buffett to maintain a unique autonomy from investment fads. His autonomy kept getting challenged – particularly in the late 1990s. Buffett, whose investments funds had clearly beat the general stock index for many years and decades, was deemed “old school” during that time. What the media and the investor community saw in him was an old man who failed to grasp the new times that were paced by the Internet and the New Economy. During the time of the Internet bubble, Buffet’s funds were outperformed by many other funds that committed themselves to New Economy units. But he remained true to his maxim not to invest in things that he did not understand. Although he was close friends with Bill Gates even then he admitted to know nothing about the Internet and new technology – and hence refrained from investing in this sort of stock.

For many years, he actually refused to get a computer because he felt his head was quite sufficient for doing his math. Even the offer made by Bill Gates to send him Microsoft’s best-looking employee to explain the features of a PC to him could not sway his mind. When he ended up buying a PC after all, it was exclusively because it permitted him to play his favourite game, Bridge, via the Internet. Initially, he insisted that no other function be installed on his PC.

So what is the secret of Buffett’s success? Over dinner among a circle of the successful, Bill Gates Sr., the father of Bill Gates, asked him: “What factor did people feel was the most important in getting to where they’d gotten in life?” And I said ‘Focus.’ And Bill said the same thing” (p. 623). His almost exclusive fixation over decades on a single goal, namely to invest successfully, is certainly one of Buffett’s secrets. In an aside highlighting the point, his wife once suggested that he needed only a light bulb and a book in his hand to be happy.

While financial success became the defining goal in Buffett’s life early on, it was in no way fuelled by the desire to lead a luxury life and to acquire expensive material goods. Quite on the contrary: It is well known that Buffett has lived for decades in the same modest building, prefers hamburgers over gourmet restaurants and Coca Cola to champagne. So what is the driving power behind a person like Buffett? At heart, it is probably the wish to demonstrate his superior intelligence. And sure enough, his financial success was nothing if not a proof of his savvy mind. Most likely, Buffett could have excelled just as easily by becoming a chess champion or scientist.

Hence, he was particularly put off by the fact that proponents of the efficient-market hypothesis (EMH) kept trying to prove that it is theoretically impossible to permanently outperform the stock market, or at best the result of chance – in analogy to the fact that there are people who have won lottery jackpots more than once. This hypothesis must have hurt Buffett to the core, as it called everything he lived and worked for into question (compare pp. 527+). The book therefore takes the time to discuss in detail how he critically addressed the assumptions underlying the hypothesis.

The biography makes clear that Buffett attached more importance to integrity and honesty in business life than to anything else. Particularly important to him was the compliance not just with legal but with ethical standards, too. Here you will find a relation to his defining motive of his life, namely to use his investment achievements to prove his superior intelligence. If his achievements had been the result of trickery and illicit practices, they would not have been worth anything in his eyes. Impeccable behaviour meant more to him than abidance by statutory parameters.

Buffett propagated a strict “front-page test” that went like this: “I want employees to ask themselves whether they are willing to have any contemplated act appear the next day on the front page of their local paper, to be read by their spouses, children, and friends, with the reporting done by an informed and critical reporter” (p. 604).

Seen with the benefit of hindsight, the story of Buffett’s investments is one of lasting success. But in truth, Buffett is a master of constant crisis management. By no means were his investments always crowned with success. It was sometimes not until after he had made a given investment that he discovered the specific problems and challenges it involved. Yet he would accept the challenges, focus his entire attention on the problem at hand – and solve it in surprising ways. In addition to his bright mind, the inner autonomy of his judgement, and his exclusive focus on a single goal, this capacity to resolve issues is probably one of the secrets of Buffett’s extraordinary investment track-record. The many attempts to copy him probably failed simply because it was not a special “investment recipe” that made him successful, but rather the combination of his character traits. R.Z.