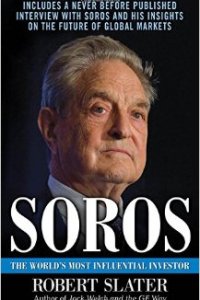 Most readers will know George Soros as the man who brought the Bank of England to its knees through a huge currency speculation against the Pound, and who made a billion dollars in the process. While Soros is a multiple billionaire and counts among the wealthiest people in the world, he is also a well-known philanthropist who committed himself most notably to the cause of freedom in Eastern Europe. Finally he is also known as one of George W. Bush’s fiercest critics – and as a critic of precisely the finance capitalist system to which he owes his wealth.

“I was born poor, but will not die poor” read a note that was pinned to the wall above his workplace. It was George Soros’s creed. But it was not, as his biographer shows, Soros’ most important goal to be recognised as a genius investor. All his life, he would have preferred to be a philosopher, and he was positively aching for recognition as an intellectual mind. Despite a number of publications with a philosophical bend, however, it is precisely this sort of recognition that has eluded him.

He likes to say of himself that he is a critic – the world’s best-paid critic. “I am a critic of the processes. I am not an entrepreneur who builds businesses. I am an investor who judges them. My function in the financial markets is a critic, and my critical judgments are expressed by my decisions to buy and sell.”

Soros grew up in Hungary. Even as a child he showed an enterprising spirit and initiative. At the age of ten, he edited a newspaper called Lupa Horshina, literally “Lupa Trumpet.” He penned all of the articles in it himself, and for two summers sold the copies for a pittance to other families vacationing on Lupa Island, a summer retreat in the Danube River close to Budapest. Being Jewish, he and his family went into hiding during the time of the German occupation, and thus survived the holocaust.

In the fall of 1947, at the age of seventeen, he left Hungary, and two years later enrolled at the London School of Economics, attending lectures by Karl Popper, among others, whose idea of an open society would fascinate Soros throughout his life. He wanted to become a social philosopher or a journalist, and present the world with major insights – “like Freud or Einstein.”

Even later, as a financial investor, he kept trying to elevate his actions with a philosophical angle. That said, “George Soros’s theories revealed only a part of his investment secrets, the framework that explained how he believed financial markets operated. … The framework did not, however, reveal how George Soros operated.”

Chances are that his character traits go a longer way than his theories in explaining his success as financial investor. “One of Soros’s most useful qualities was his ability to detach his emotions from his dealings in the financial markets.” Whenever events proved him wrong, he would freely admit to his error rather than trying to prove that he had been right. He was also very bold in this speculations, often bolder than others. “The worst error in Soros’s book was not being too bold, but too conservative. ‘Why so little?’ was one of his favorite questions.”

Time and again, Soros would look into real estate, too. In fact, the first industry that Soros focused on for his extremely successful Double Eagle Fund was REITs. “In 1969, Soros established a solid reputation by pointing out, in a widely circulated memo, the advantages of investing in a new vehicle called the real estate investment trust (or REIT).” He returned to real estate in the early 1990s when teaming up with Paul Reichmann and forming a real estate fund worth 225 million dollars, the Quantum Realty Fund, in 1993. He soon acquired a 634 million dollar package of foreclosed real estate and announced his intention to spend 1.5 billion dollars in real estate projects in Mexico City. Four months after having set up the fund with Reichmann in the United States, Soros formed an even larger one that was supposed to serve as instrument for investments in UK real estate. His Quantum Fund joined with a London-based developer called British Land, and this time Soros earmarked 775 million dollars for property investments.

But Soros has never focused on just one asset class. At times, he made a lot of money through currency speculations, at other times with gold or real estate. Unlike Warren Buffett, for instance, his investments have never been long-term in nature. Soros cannot be considered a long-term investor, but counts among those investors that take advantage of short-term imbalances within the financial system.

A trait he does share with Buffett is that he has left-wing liberal political leanings rather than conservative ones. That said, he is more radical in his political activities than Buffett. He spent a lot of money supporting a number of left-wing groups in their fight against George W. Bush. Above all, however, he committed large amounts – both before the fall of the Iron Curtain and after – to the effort of spreading democratic values in Eastern Europe, and to his foundations and their cause of an open society.

The book also touches upon George Soros’ private life: He spends little time watching TV because he feels he has no time for such things. He reads “serious stuff – more philosophy such as a book on the origin of wealth, which is complexity theory, that kind of stuff, and at the same time I have been reading a biography of the bin Laden family, which is a very good book, so biography is probably my favorite.” The British newspaper Independent once characterised Soros as follows: “He looks a decade younger than his years, perhaps as a result of his compulsive tennis playing and lack of interest in the flashy lifestyle that New York offers to the seriously rich. He neither drinks nor smokes, and his taste in food is modest. He comes across like an earnest, rather untidy Middle European professor” (p. 12). R.Z.