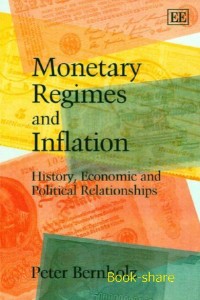 The danger of deflation is subject to intense debate. At the same time, however, there are an increasing number of voices warning of the medium-term risk of inflation as a result of the ever-expanding money supply. A great book on the subject is the remarkable scientific study “Monetary Regimes and Inflation” by Peter Bernholz, originally written in 2003.

The author, a former professor of economics in Basel, Switzerland, shows that between 1800 and 1914 (except during the years of the Napoleonic wars) inflation was not an issue, as the monetary systems in place at the time were based on the gold or silver standard. In fact, some countries returned to the gold standard after World War I, examples being the United Kingdom and Switzerland.

The key finding of the book reads as follows: “First, all hyperinflations in history occurred after 1914 under discretionary paper money standards except for the French case during the Revolution of 1789-96 …, when a paper money standard was introduced with the assignats… Second, all countries moving to inconvertible paper money standards in the 18th and 19th centuries experienced higher rates of inflation than those on gold or silver standards” (pp. 8-9).

Accordingly, monetary systems based on the gold standard show inflationary tendencies much less often than pure fiat money systems not backed by gold bullion. While the author believes that gold-backed currencies offer the highest level of protection against inflation, he concedes that independent central banks are the second-best bet. He conducted a historic analysis to demonstrate that countries like Germany, Switzerland, and the United States, which do operate central banks, have much lower inflation rates than counties that have no independent central banks.

So what do readers of this book get to take home? The key problem for investors is that it is hard to decide which scenario actually seems likelier, and that are virtually no investment that will reward them handsomely under either scenario. If you believe that inflation is looming you will borrow, but if you foresee deflation you will pay back your debts. At the very least, an investor preparing for deflation will buy government bonds from very safe countries, whereas an investor seeking to dodge inflation will opt for inflation-linked bonds, etc. My recommendation would be: Unless you are absolutely certain about the future trend (and who in their right mind could say as much?) you should take a conservative approach and bet your investments on more than one scenario. This means: It makes sense to commit a certain share of your capital in investments that will yield a profit in case your expectations are frustrated. Naturally, you would turn a tidier profit if you bet everything on the eventuation of a single scenario (be it inflation, deflation, a further drop of the stock markets, or conversely their recovery, or something else), but as the saying goes: “Don’t put all your eggs in one basket.” R.Z.