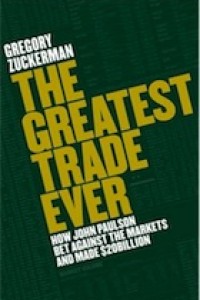 Time permitting, I read just about every book on the financial crisis I could lay my hands on in recent years. This one is by far the best of them.

It tells the story of John Paulson and other anti-cyclically oriented investors who became aware of the bubble on the American housing market early on, and who knew how turn the awareness into a lot of money. In the case of John Paulson, the sum was 20 billion US dollars, him personally making four billion dollars.

The book’s author, having worked as reporter for the Wall Street Journal for twelve years and today a commentator for CNBC, is a master at explaining the complex financial economy contexts that remains all Greek to the overwhelming majority of people (politicians included) who talk about them. At the same time, Greg Zuckerman portrays the personal background and the strategies of Paulson and other contrarians.

Quite a few people foresaw that the housing price bubble in the United States would burst. And quite a few investors even had the idea to cash in on that intelligence. Yet several problems presented themselves in this connection:

Hedge fund manager Paulson initially tried to short equities of developers engaged in housing construction. The strategy failed to work out. So he and other investors started looking for a possibility to benefit more directly from the anticipated erosion of house prices.

They finally chose CDS contracts that were used to insure a bundle of securitised dubious subprime loans against default of payment. The premiums for these CDS (credit default swaps) were ridiculously low (1.2% of the sum insured) because most market players did not believe in a default. Investors who bought the securitised mortgage loans relied on the verdicts of the rating agencies, which in turn were based on calculations of default probabilities. Paulson remained unconvinced by these ratings: The data sourced to determine the future probability of default were historic, dating back to a time when, first, home prices were going nowhere but up and, second, the share of subprime loans had been much, much lower. Accordingly, or so he thought, it was impermissible to use intelligence gathered in the past to make predictions regarding the future.

As is well known, the securitised mortgage loans were later bundled together with other supposed cash-flow providers into CDOs (collateralised debt obligations) against whose default other CDS were developed. Then, there were various other options. “They’d even create a CDS insurance contract for an index that tracked a group of subprime mortgages, called the ABX, a sort of a Dow Jones Industrial Average for risky home mortgages“ (p. 87).

Interesting to note, by the way, is the fact that the first one to recognise these possibilities was Greg Lippmann of Deutsche Bank. He had a hard time to convince his colleagues, though, who considered him a nut. The same is true for some of the other investors introduced by the book – such as Jeffrey Greene or Michael Burry. They all were in thrall of a single idea: The bubble on the US housing market would pop, and this was the chance to make the investment of the century.

Initially, Paulson found it difficult to collect capital for his idea. And it figures, for most investors simply do not think anti-cyclically (which would be a contradiction in terms anyway). Once he finally found willing investors, the fund manager faced another problem. They had hoped that prices for CDS contracts would rise apace with the growing awareness among other market players of the risk that the securitised subprime loans might default. It is, however, in the nature of anti-cyclical investments that prices will not rise immediately upon buying, but will continue to fall (after all, few will manage to go short at the exact turning point of a bull market). This caused the fund investors to become nervous. The hysteria on the housing market proved contagious late in the game to many who had so far not been infected, and who began to doubt their investments in the face of falling prices for CDS contracts. In fact, some of them forced their fund managers to sell their positions at the lowest point in order to limit their assumed losses. This was to prove truly tragic to some investors. They did have the right idea, but lost their nerve, and lost money with the same type of transaction that would earn Paulson 20 billion dollars later on.

Paulson closely analysed all securitised house price loans. The task for his analysts consisted in identifying not the best but the worst risks – the ones systematically ignored by the bullish market players. They spent a lot of time pinpointing those local housing markets where house price speculations had evolved the most irrational excesses and hunting for those mortgage loans that had been granted with the least amount of care to borrowers with the poorest credit ratings. They acquired primarily insurances against the default of BBB-rated loans but could not help acquiring insurances against supposedly safe AAA tranches as well – because, if for no other reason, the premiums were so amazingly cheap.

During all of this, they basically did not expect the cash flows to dry up completely and cause the CDS “insurance” to become due. Rather, they expected to see a fast increase in the premiums to be paid for the credit default insurances once real estate prices began to falter and other market players realised that default risks were much higher than initially assumed.

This book is more than just a history of the financial crisis and its winners. It shows the opportunities, but above all the specific problems, that anti-cyclically oriented investors confront. How to you convince enough investors to go against the current during a frenzied market rally? How do you keep them in line even if prices keep dropping at first? How do you reign in your own doubts? How do you manage to identify the right moment for your investment?

The latter challenge proved particularly difficult. However, Paulson’s analyses suggested that the entire subprime system would work only as long as house prices kept rising, and as long as borrowers remained able to take out ever higher mortgages on their properties and thus to release additional funds. Thus it was clear to him that the system would stall the moment house prices levelled out. So Paulson and his allies responded like stung to a press release by the National Association of Mortgage Brokers that revealed that house prices had increased by only 1% lately. The time for the great deal was approaching, and it proved to be the “greatest trade ever” in the annals of mankind. R.Z.