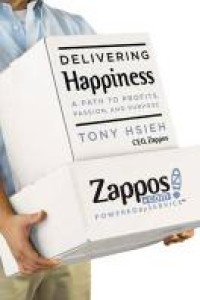 In late July 2009, Internet trader Amazon.com announced the takeover of Zappos.com, an online shop for shoes and clothes. The volume of the deal was valued at 1.2 billion US dollars on the day of closing. Thirty-five years old at the time, the company’s CEO, Tony Hsieh (pronounced “Shay”), made at least 214 million dollars from this deal alone, not counting the money that his former investment firm Venture Frogs made through the deal. Born in 1973 to a family of Taiwanese immigrants, Hsieh describes in his autobiography how he came to be so successful.

After graduating from Harvard with a degree in computer science, Hsieh went to work for the software company Oracle in 1995. He was well paid, but felt bored all day because he had nothing truly challenging to do. One weekend, he and a friend had an idea that they turned into the company LinkExchange shortly after. “If you ran a Web site, then you could sign up for our service for free. Upon signing up, you would insert some special code into your Web pages, which could cause banner ads to start showing up on your Web automatically. Every time a visitor came to your Web site and saw one of the banner ads, you would earn half a credit.” So if 1000 people visited your website you would get 500 credits. These 500 credits meant that your own website would be advertised 500 times for free through the LinkExchange network. “The extra five hundred advertising impressions left over would be for us to keep. The idea was that we would grow the LinkExchange network over time and eventually have enough advertising inventory to hopefully sell to large corporations.”

They mailed the idea to 50 websites and were surprised when half of them responded positively within 24 hours. It soon turned out that they had discovered a gold mine with their idea. Within months after starting LinkExchange, a person called Lenny called from New York and stated he was looking into a possible acquisition of the company. They met with Lenny, and much to their amazement he offered to pay them a million dollars for a company just months old that had yet to turn a profit. Hsieh declined, but the offer showed him that he was on the right track. In December of that year, he received another call, this time by famous Yahoo! co-founder Jerry Yang. Yang had collected a billion dollars through the IPO of Yahoo! that year, and was offering Hsieh to buy his company for 20 million dollars. “The first thought that came to my mind was Wow. The second thought that came to my mind was I’m so glad we didn’t sell the company to Lenny five months ago.” To Hsieh, the situation felt like a déjà vu, except the sum offered was much higher – a lot higher. Hsieh again turned the offer down, though.

Hsieh and his friends decided to set up an investment fund that would invest in other promising Internet companies. He collected 27 million dollars among former LinkExchange employees. One of those who applied for financing through the fund was a young man named Nick Swinmum who had started a website for selling footwear – shoesite.com.

Initially, Hsieh thought the idea absurd – as did most people. Who would want to buy shoes without trying them on first? He quickly learned, though, that the US shoe market had an annual turnover of 40 billion dollars, and that no less than five percent of it represented mail order sales. Moreover, mail order sales were the fastest growing segment in the shoe business.

Nick did admit, however, that he knew nothing about the shoe business, so Hsieh made it a primary condition for investing that Nick find someone who did. Once Nick had met this condition, a new business idea was born. The Internet portal, now renamed Zappos.com, would partner with hundreds of shoe brands and forward incoming purchase orders directly to the shoe companies, which would deliver the shoes in their own right. First talks to footwear manufacturers, however, were less than encouraging, most of them had misgivings. Hsieh’s fund did not have a lot of money left for new commitments because it had already invested in another 27 promising Internet companies.

Over the next two years, Zappos struggled to stay alive, repeatedly on the brink of bankruptcy. Every few months, Hsieh would contribute cash from his private bank account. He remained convinced that the idea underlying Zappos was sound, but he was not sure whether he would manage to keep the company alive long enough, given the high monthly losses. Jobs were cut, and the salaries of the remaining staff were cut, too. Yet he realised that cuts alone will not suffice to turn a company around.

Hsieh and his staff tried to think of ways to do things differently than before in order to make the company a successful business. The problem with Zappos was above all that the company was unable to collaborate with many popular shoe brands because these could not deliver shoes directly to the end customer. Hsieh therefore decided to build up his own inventory of shoes, doing which would require another two million dollars in investments. He was prepared to stake everything on one card. “This was a ‘bet the company’ plan… Continuing with the drop-ship-only route that we had been on and dying a slow death didn’t sound like very much fun. It would just be delaying the inevitable.”

In this situation, Hsieh decided to sell all his entire property in order to keep the company alive – along with a party loft he had become particularly fond of. However, nobody wanted to buy the property at its cost price, and so he finally had to settle for a “fire sale” that netted but 60 percent of the cost price.

Sales continued to rise, totalling 32 million dollars in 2002. It appeared the company was headed in the right direction. It was in this situation that Hsieh defined a much bigger goal for the company, a simply unbelievable goal for most employees. He wanted sales to top one billion dollars by 2010 at the latest. It was surely an important decision, and the right one to make, because difficult situations more so than others, call for lofty goals in order to provide motivation and the energy to keep going. If your goals are too modest, they will not give you the power you need.

The next setback occurred in 2008, when the financial crisis got all US companies in trouble. As a precautionary measure, Zappos let eight percent of its workforce go. Yet the company’s strategy kept paying off, and in July 2009 it was taken over by Amazon, known mostly as an online book seller. Amazon paid the owners of Zappos 1.2 billion dollars worth of Amazon stock, and made Zappos a wholly-owned subsidiary. R.Z.