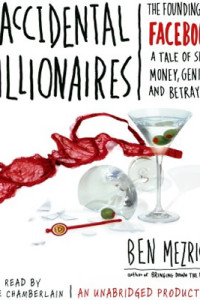 In a book written more like a novel than a non-fictional account, Ben Mezrich tells the story of Facebook. Just to what extent his version of the story, especially the legal battle over the copyright to the idea, matches the facts is hard for me to say. We will probably have to wait for other books on the subject. For the time being, let us see what Mezrich has to say about the genesis of Facebook.

The history of Facebook – by far the world’s most successful social network to date – starts at Harvard, one of America’s leading universities. The name “Facebook” stems from the term commonly used for the illustrated directories given to students at some American universities to help them find their way around campus. These facebooks include basic information on, and photos of, fellow students. While Harvard did not have a standard student directory with pictures at the time, private ID images for the houses’ dormitories on campus were available.

It was by accident that Mark Zuckerberg, a psychology major at Harvard, discovered how attractive social networks are, and how fast they can proliferate. In late 2003, he hacked into the campus computer network to download text and image data on fellow students listed therein. According to the author, it was supposed to be a prank, as Zuckerberg only wanted fellow students to compare the looks of some Harvard co-eds.

He called the page Facemash.com, and circulated the link among his friends. When he returned to his dorm room from a class he found that his laptop had locked up, playing the role of server for facemash.com. To his surprise, Facemash had spread at breakneck speed. Someone had forwarded his mail to several campus group list-servers, including the institute for political science and women’s rights organisations such as the Latina Women’s Issues Organization and the Association of Black Women in Harvard, which failed to appreciate the humour in the whole thing and considered it politically incorrect, to say the least. However, their outrage unwittingly drew the attention of yet more students to the webpage.

Suddenly, Facemash was everywhere. “A Web site where you compared two pictures of undergraduate girls, voted on which one was hotter—then watched as some complex algorithms calculated who were hottest chicks an campus—had gone viral throughout the campus. In under two hours, the site had already logged twenty-two thousand votes. Four hundred kids had gone onto the site in the past thirty minutes” (p. 56).

For other students, the practical joke may have ended right there, but Zuckerberg began to wonder what the swift spread of Facemash might mean. The thing was, he had not simply posted the pictures of pretty girls on a website – there was no shortage of such websites – but Facemash had posted the pictures of actual Harvard students whom students may have seen on campus or may have known personally.

During the months to come, Zuckerberg developed the idea of creating a website that mapped social networks – containing not just images, but profiles and diverse applications as well. Each user was to be given a profile page where he or she would post personal information and upload photos or videos. On a bulletin board, visitors would be able to leave visible messages or publish notes or blogs. A watch list would inform the user of news, such as bulletin board entries on the profile pages of friends.

Zuckerberg named his project “Facebook.” Her told his friend Eduardo Saverin of his idea, who was immediately thrilled. When Zuckerberg needed 1,000 dollars to realise his project, but did not have them, he cut Eduardo in on the project with 30 percent. Another two fellow students joined the project, Dustin Moskovitz and Chris Hughes.

The home page of Facebook welcomed the user with the words: “Thefacebook is an online directory that connects people through social networks at colleges. We have opened up Thefacebook for popular consumption at Harvard University. You can use Thefacebook to: Search for people at your school; Find out who is in your classes; Look up your friend’s friends; See a visualization of your social network” (p. 9).

The domain of what was originally called Thefacebook was registered on 12 January 2004. A short while later, though, Zuckerberg got in trouble because other students were claiming he had gleaned their idea. They had approached Zuckerberg in the wake of the Facemash prank and asked him to help them program their own website. To this end, they had made source code available to him. They now maintained that it had been the true origin of Facebook, and that Zuckerberg was thus in breach of an – admittedly just oral – agreement. The students complained to the director of Harvard University, who felt the students should settle the dispute among themselves. In 2004, the year Facebook was founded, the students sued Zuckerberg in the name of their company ConnectU for theft of intellectual property. Facebook told the public they had reached an agreement with the plaintiffs and had paid 65 million dollars.

Notwithstanding these squabbles, Facebook grew at an exorbitant rate. While initially open to Harvard students only, the website soon admitted students from other campuses across the United States. Eventually, high schools and certain companies were permitted to join. In September 2006, Facebook became available to students in foreign universities, and later that same year it opened to anyone over 13 with an e-mail address. Since spring of 2008, the website has been available in German, Spanish and French, and additional languages followed soon thereafter.

In summer 2010, the magical threshold of 500 million Facebook users was crossed, with ten million of them registered in Germany, by the way. Zuckerberg has often emphasized that he has not yet settled on a definitive business model. It is something he has in common with the founders of Google. Like Larry Page and Sergej Brin, Zuckerberg believes that options to make money would present themselves once there were a sufficient number of users, and once you had a dominant market position. Personalised ads might become a very profitable source of revenues, for instance.

Zuckerberg had an easy time convincing a number of financiers that Facebook would make a lot of money some day. It had all started innocent enough in 2004 when his friend Eduardo Saverin contributed a sum of 18,000 dollars. In June of that same year, Internet investors Peter Thiel joined in, contributing 500,000 dollars. Today, he owns 7 percent of Facebook, which today, given Facebook’s estimated market value of 10 to 15 billion dollars, would equal more than a billion dollars. As how valuable the company is seen is suggested by the fact that Microsoft paid 240 million dollars for a share of just 1.6 percent. Microsoft paid such a high amount not least in order to keep its rival Google from buying in. In 2009, the Russian investment firm Digital Sky Technologies acquired an interest worth 400 million dollars – and holds 6.9 percent of the company stock today.

More than once, other big companies attempted to take Facebook over in its entirety. Viacom offered 750 million dollars in 2007, and Yahoo submitted a bid over one billion dollars. Zuckerberg declined all of these offers. Up to then, Facebook had not even turned a profit yet. It was not until 2009 that revenues exceeded expenses for the first time. It is now expected that Facebook will make a public offering one of these days. R.Z.