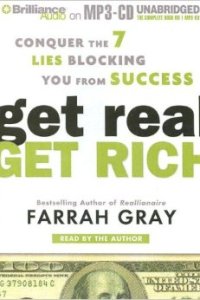 There is no lack of books about how to get rich. Whenever I pick up a new book on the subject, the first thing I want to know is whether or not the writer is living proof that his or her advice actually works. This is certainly the case with Farrah Gray. An Afro-American, he grew up as the youngest of five children raised by a single mother in the impoverished south side of Chicago. However, Gray overcame the odds to become a millionaire by the age of 14. The National Urban League’s “Urban Influence Magazine” recently named him one the most influential Black men in America.

In this book, he seeks to debunk seven “lies” about getting rich. On a less dramatic note, I would prefer to call them misconceptions, because rather than representing wilfully disseminated untruths, they are simply wide-spread myths. What sort of myths does Gray have in mind though?

Myth no. 1: “You have to be born with connections or with special talent to be rich.” To refute the “Born Lucky Lie,” Gray argues that it is all about the law of probability. What he means is that you need to increase the number of occasions for meeting people; you need to build up a network and to open doors. No matter whether you are looking for a partner or wish to set up a business – no one will come and knock on your door. The key to success, he argues, lies in volume: How many times did you try? How many rejections did you get before you were accepted? How many times did you start all over again, and took an entirely new approach? Gray believes that “the concept of being ‘at the right place at the right time’ is a complete and utter falsehood.” Rather: “You need to be everywhere at once.” He adds that you should always look at your life from the angle of the law of probability. The more you are willing to meet people half way, the higher the chance that you will get what you want. To back this theory, Gray cites many examples from his own life and the lives of others. I personally would call it “the law of large numbers.”

Myth no. 2: “I have to work hard and make sacrifices to be rich.” The way Gray sees it, hard work is a name for the kind of work you hate doing – and this is no way to get rich at all. As he explains, the point is not to simply labour more, but to do that which most matches your skill set, and where your chances of excelling are highest. To find out what these are, you should try to answer three questions: What is easier for you to do than for others? What would you do any time and in any case, even if you did not get paid for it? In what ways could you make yourself useful and do something for others?

Myth no. 3: “I have to hit it big in entertainment or sports to be rich.” Many people are blinded by a handful of celebrities that are fêted by the media. In truth, Gray observes, there are countless people who are completely unknown outside their field but who make much more money and who have amassed much bigger fortunes than the few stars everybody knows.

Myth no. 4: “You must first have money to make money and get rich.” This so-called “Money Lie” is particularly popular among those whom financial success keeps eluding. People who unexpectedly come by large amounts of money tend to lose it just as quickly, and Gray illustrates the point by citing two examples: One is the case of Evelyn Adams who won the lottery jackpot in New Jersey not just once but twice (1985, 1986), collecting a total of 5.4 million dollars. Today, the money is gone, and she lives in a trailer. The other case is William “Bud” Post who won 16.2 million dollars in Pennsylvania and who is on welfare today. Conversely, there are a much larger number of people who started out with just a few dollars, or actually used their credit cards to finance their first steps as entrepreneurs, and got rich anyway.

Myth no. 5: “I have to have zero debt to be rich.” Rather, Gray argues, the opposite is true: You need to borrow to get rich. You should employ borrowed capital to build a fortune. The one thing you need to remember is to distinguish between bad debt (consumer debt) and good debt (debt used to finance a let property or a business).

Myth no. 6: “I have to be super smart or invent something the world relies on to be rich.” While the stories of Bill Gates, Steve Job, Sergej Brin and Larry Page are exciting, as he admits, they can also lead you down the wrong path. No one needs to aim as high as Microsoft or Google. Rather, there are any number of opportunities to build a fortune in certain niche sectors. Gray illustrates his points with several spellbinding accounts, one being the story of Tina Wells. Aged 26 at the time the book was written, she is the head of Buzz Marketing Group in New York, a company that has conducted market research among the younger generation on behalf of other companies for the past eleven years. She started out at 16 when working for the teenage magazine New Girls Times and writing her first reports about products aimed at young consumers. Tina exploited her own fascination with fashion and pop culture to identify a gap between the desires of the teenagers and the misguided products and services developed for them by many companies. When she started to submit her reports and proposals directly to the respective companies, she got an overwhelmingly positive response. Today, her company makes 3.3 million dollars in revenue, and counts renowned companies like Nike or Sony among her clients.

Myth no. 7: “I have to know a lot about the stock market or work on the Street to be rich.” Gray counters that investment returns are precisely not coming directly from Wall Street but are based “on your knowledge and your preferences.”

He argues that self-esteem and coping skills are what really counts. Gray cites an interesting survey among 500 leading CEOs in the US. These, as it turns out, have more self-esteem than 90 percent of the general public. They also turned out to be better at solving problems and generating ideas than 92 percent of the US population. R.Z.