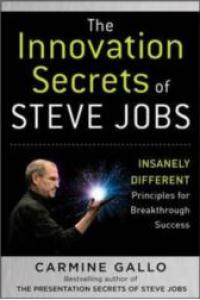 Steve Jobs is one of the most successful entrepreneurs of our day and age, and certainly one of its most brilliant marketing experts. So what can we learn from his achievements? What made me most curious about the book is the fact that I keep mentioning him in my own book “Dare to be Different and Grow Rich.” It is too bad that I did not read this book before putting pen to paper, because otherwise I would have included a quotation by Michelangelo that author Carmine Gallo cites: “The greater danger for most of us lies not in setting our aim too high and falling short; but in setting our aim too low, and achieving our mark,” said Michelangelo, according to the author, and what he and Steve Jobs have in common is their ability to see things that elude most of us. “Michelangelo, as with Jobs, could see things that others could not. Michelangelo looked at a marble block and saw David; Steve Jobs looked at a computer and saw a tool to unleash human potential” (p. 12).

Two of the key principles of success for Steve Jobs are radical focus and radical simplicity. An important factor, according to Jobs, is “saying no to 1,000 things to make sure we don’t get on the wrong track or try to do too much. We’re always thinking about new markets we could enter, but it’s only by saying no that you can concentrate on the things that are really important” (p. 139).

Just as Warren Buffet is extremely sceptical in regard to the supposed benefits of a wide diversification of capital investments, Steve Jobs eyes the idea of product diversification in a company with suspicion. He flat out rejects the widespread notion that you should lower your risk by diversifying your product spectrum. “Apple, he said, represents the anti-business school philosophy. Apple’s approach is to put its resources behind a few products and commit to making those products exceptionally well” (p. 152). John Scully, the former CEO of Apple, once said: “What makes Steve’s methodology different than everybody else’s is that he always believed that the most important decisions you make are not the things that you do, but the things you decide not to do” (p. 152).

In an interview with Fortune magazine in 2008, Jobs noted: “We tend to focus much more. People think focus means saying yes to the thing you’ve got to focus on. But that’s not what it means at all. It means saying no to the hundred other good ideas that there are. I’m actually as proud of many of the things we haven’t done as the things we have done” (p. 152). Jobs took such a radical view of the issue that he slashed the product program of Apple from 350 down to ten in 1998.

Focusing on simplicity was also the guiding principle of his product design. For instance, he dispensed with keys on the front side of the iPhone altogether, and replaced them with an oversized screen. “Apple refines every detail in the ultimate quest to reduce – or eliminate – complexity. If something does not have to be there, it isn’t” (p. 142). When the iPad was put on the market, even the company website was slimmed down to present just this one product: The image alone took up three quarters of the screen, along with the caption: “iPad is here” (p. 151). The company took the same approach when introducing other products: It removed products from the homepage to make space for the new item.

Simplicity is key to success. The developers at Apple hate manuals. They wanted the customer to understand the product instantly and to learn to use it without the aid of a manual within 30 seconds (p. 156).

Simplicity and focus are also sound principles to apply to one’s life in general, or so the author suggests. In his eyes, it makes less sense to take on new challenges than it makes to contest the things you do now. “As a New Year’s resolution – or anytime during the year – create a ‘stop doing’ list. Cut down on the time you spend on projects or tasks that do not advance your core purpose and fulfill your passion” (pp. 171-72).

Another success factor for Apple or Steve Jobs was to elevate the own activities and to invest them with a higher significance. “In 1983, Steve Jobs was not selling a computer; Jobs was selling freedom from an IBM-controlled universe” (p. 63). He inspired his employees and his fan community “by painting a vision of Apple as the last company that could protect the masses from IBM’s ‘domination’” (p. 64). Finally, Jobs was much better than his competitors at putting himself in the shoes of his customers and truly comprehending their needs. That is why, unlike other companies, he refrained from having new products tested before their introduction by so-called focus groups. The author advises his reader to do the same: “Be your own focus group. No outside focus group will give you the green light to develop breakthrough innovation” (p. 134).

This is a book full of hands-on suggestions, and plenty of food for thought above all. While capturing the success principles of Steve Jobs more succinctly than any other book I have read on the subject, it also puts these principles in context with the challenges that every entrepreneur and manager faces. R.Z.