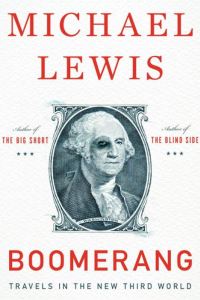 Some years back, a well-known investment banker at Morgan Stanley gave me a copy of the book “Liar’s Poker” by the US business journalists Michael Lewis. He told me I just had to read this book if I wanted to get a true sense of how the US finance industry works. Two years ago, a senior executive of a real estate company advised me I should definitely read “The Big Short” by Michael Lewis if I wanted to understand the ongoing financial crisis (you will also find a review of this excellent book elsewhere on this website). I devoured both books, and benefited greatly from either.

I was also impressed by this latest book by Lewis, even though it includes a number of very dubious sections along with the brilliant ones. The author describes the impressions he gained during a tour of Europe on which he embarked to get a better idea of what the phenomenon we now call the Euro crisis was all about. His travels took him to Iceland, Greece, Ireland and Germany. He supplements his impressions with accounts of US municipalities so heavily in debt that they remind him of Greece.

It is quite on purpose that his travel log strikes a highly subjective note, and Lewis is not squeamish about capturing the national characters of Icelanders, Greeks, Irish and Germans in precipitous and pointed profiles. That he is occasionally off the mark I realised for sure when reading the chapter about the Germans, whose most distinct character traits, he finds, is a tendency to overuse scatological similes. My guess is that German readers will appreciate this sort of profiling no more than the Icelanders will like being profiled as ingenuous and deluded fishermen. Then again, the book does contain a plethora of insights and accounts that help the reader understand what exactly caused the banking crisis in Iceland, the real estate and banking crisis in Ireland, or the de-facto sovereign default of Greece.

Lewis also outlines the psychological background against which the enthusiastic and fatal commitment of German state banks in subprime loans becomes more plausible. “Extremely smart traders inside Wall Street investment banks devise deeply unfair, diabolically complicated bets, and then send their sales forces out to scour the world for some idiot who will take the other side of those bets. During the boom years a wildly disproportionate number of those idiots were in Germany.” But was it just idiocy or maybe a measure of vanity as well? “The people in these banks,” Lewis cites one of his German sources, “were never spoiled by any Wall Street salesman. Now there is someone with a platinum American Express credit card who can take them to the Grand Prix in Monaco, takes you to all these places. … The Landesbanks were the most boring bankers in Germany so they never got attention like this. And all of a sudden a very smart guy from Merrill Lynch shows up and starts to pay a lot of attention to you. They thought, ‘Oh, he just likes me!’ … The American salespeople are much smarter than the European ones. They play a role much better.”

While Lewis failed to write an analytic book, his insights do reveal a lot about the causes underlying the issues. A case in point is his account of the absurd Greek state economy: The Ministry for Agriculture, for instance, set up an off-balance-sheet department with 270 staff whose mission was to digitalise pictures of state-owned properties. The thing was, though, that none of these 270 employees had any experience in digital photography. Rather, they had trained to be hairdressers or some other profession. The retirement age for jobs classified as “arduous” in Greece is as early as fifty-five for men and fifty for women. “As this is also the moment when the state begins to shovel out generous pensions, more than six hundred Greek professions somehow managed to get themselves classified as arduous: hairdressers, radio announcers, waiters, musicians, and on and on and on.”

In due fairness it must be said that the author does not spare his fellow-Americans, as he paints a stark picture of US municipalities that are bankrupted by their horrendous pension plan obligations vis-à-vis their civil servants – so that retired fire fighters and policemen live quite comfortably while there is no money left to pay firemen and police officers on active duty. In cities like these – a prime example being Vallejo in the Bay Area in California – it takes a lot longer now to put out a fire, and you may not feel secure anymore, because there are few active policemen left. “Weeds surround abandoned businesses, and all traffic lights are set to permanently blink, which is a formality as there are no longer any cops to police the streets. Vallejo is the one city in the Bay Area where you can park anywhere and not worry about getting a ticket, because there are no meter maids, either.”

The book outlines a horror vision of countries and municipalities that have lived on borrowed money and at the expense of future generations for such a long time that the system eventually collapses. “Travels in the New Third World” is a title as catchy as it is apt. It is book of gloomy prospects, and I can well imagine that history books a hundred years hence will quote from it in the chapter about the final stage of the sovereign debt systems. R.Z.