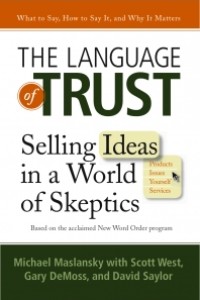 The authors’ diagnosis is perfectly plausible: We live in a world marked by scepticism. People have become more distrustful than they used to be – vis-à-vis companies, politicians, and other institutions. Many companies have the feeling “that half the people we need to convince don’t trust us, and the other half don’t even want to hear what we have to say. When our intentions are good, we are doubted. When our products are good, people assume there is a catch. When we tell a positive story, people assume we are hiding something. And if we happen to work for a large corporation, people assume that we are out to profit at their expense” (p. ix).

The same phenomenon is actually rampant in Germany, too: Polls suggest that the number of those who have faith in corporates or politicians is steadily and rapidly dwindling. No major project can be tackled anymore without prompting the formation of civic action groups and other critical stakeholder groups who oppose it. The protest against the new central train station of Stuttgart has become a cause célèbre that is now reflected in movements everywhere. Bloggers vent their misgivings on the Internet – targeting companies, products, services, anything. Trying to stem this tide is no easy task. The very fact that a person pursues economic interests arouses suspicion and puts the person in an awkward position.

“For better or worse, consumers now view companies and salespeople much like the prototypical used-car salesman. Whether we are talking about our products, our corporate social responsibility, or our position on important policy issues, most people assume that we have an ulterior motive—that we are putting our own interests in front of theirs; that we are overpromising and underdelivering; or that we are cherry-picking statistics to prove our point” (p. x). Put in a nutshell: “… trust is dead … We now live in an era of mistrust” (p. x).

Few will listen to a person citing expert opinions anymore. People will ask, “What experts?” If you quote figures that substantiate your hypotheses your listeners will believe the stats have been doctored, or find other figures on the Internet that appear to disprove it (p. 17). Sound rational arguments have little power of persuasion when facing this type of underlying attitude: “The problem is that no one wants to hear it. The public calls them ‘half-truths.’ A half-truth does not pull a skeptic halfway toward your view. It pushes them further away” (p. 17). Simply put: “In a PTE [= post-trust era, R.Z.], you are guilty until proven innocent. Silence is considered an admission of guilt. And every minute you fail to tell your own story is an eternity for critics to tell theirs.“ (p. 19)

This is the background against which the book’s argument unfolds. The authors are of the opinion that those they wish to persuade others need to check specifically whether they speak the right language. Many corporate representatives and politicians fail to reach their audience because they use a technical or insider jargon. And this is precisely one of the manifest changes in communication: Whenever complex verbiage was used in times past, many people questioned their own expertise first and perhaps interpreted even the hard-to-follow rhetoric of a manager as a sign of his superior grasp of the facts as an expert. These days, complicated discourse will inspire doubt before any other reaction. They reject things they fail to understand immediately, because a basically sceptical attitude has taken the place of giving someone the benefit of the doubt (pp. 71-72).

It is also of the essence to find just the right length for a given statement. Two mistakes are often made in this context: As often as not, the way facts are presented is either far too winded or detailed, or else too short. To phrase something in simple language means, on the one hand, that you need to elaborate some things at greater length – and the authors cite several good examples (pp. 79+). On the other hand, however, companies tend to dwell on details, even and especially in times of crisis – which is an experience I myself have often made as a PR consultant. “Now think about examples of CEOs, celebrities, or even children trying to explain why they don’t deserve to be blamed for something they did. More often than not, their statement will be longer, there will be more ‘hemming and hawing,’ and the point of the response will often get lost in a sea of unnecessary words. And with every additional word, trust disappears a little more” (p. 83).

The book contains a number of valuable suggestions on how to use language in a manner that will succeed in dissolving the sceptical basic attitude of people. All that being said, I actually find their opening diagnosis more meaningful than the various words of advice the authors have to offer. The book is summarising a feeling we all share – that we live in a world of scepticism. And the book invites us to think about what this might mean for our own ways to communicate. R.Z.