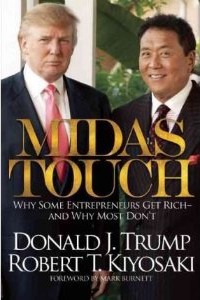 As a reader frequenting this book review portal, you may be familiar with the books of Robert T. Kiyosaki who made a name for himself with the story of his two fathers (his biological dad having been poor, and his second dad having been rich). I must say I got a lot out of his books, which is more than I used to be able to say about the books by Donald Trump. So I was curious about the outcome of this joint effort by these two as they set out to write a book on such an interesting subject: the question why some entrepreneurs do well in business while most of them fail.

The narrative structure has the authors take turns recounting stories from their lives and illustrate the five following success factors for entrepreneurs in the process:

The term strength of character refers mainly to the tolerance for frustration that is always also a part of being an entrepreneur. “Simply put, most people fail to become successful because they fail to fail enough” (p. 8). As someone who kept suffering major setbacks throughout his life or indeed went bankrupt, learned from the experience and made his way back up, Donald Trump relates some wonderful stories to illustrate the point.
According to the authors, an entrepreneur needs to have the same capacity to accept failures as a sales person. In fact, the authors keep reiterating like a theme that the most important skill of an entrepreneur is his ability to sell (see pages 10, 12, among others). While I could not agree more, I should like to add nonetheless that a good seller will not necessarily make a good entrepreneur. Quite on the contrary: I have known many people who were good at selling but failed when going into business on their own, because they lacked the discipline to set money aside, to do their books properly, and all the rest of it. The advice “If you are not good in sales, than you must find a partner who is” (p. 12), applies inversely to the top seller, who should be advised: If you are no good at organising, handling your finances, and accounting, then team up with a partner who is.
The book also points out how important it is to find a mentor, who should be an entrepreneur in his own right and not a permanently employed management consultant. “Many entrepreneurs make a big mistake by asking for advice from a successful employee, rather than from a successful entrepreneur” (p. 21).
Another key success factor they identify is staying focused – something that Trump learned the hard way by losing his focus on occasion: “My biggest mistake was that I lost my focus and was playing too much. I’d go to the fashion shows in Paris and didn’t have a firm hold on my business. I just thought everything would keep rolling along with the money flowing in. My father once said that everything I touched turned to gold and I started to believe that” (p. 25). For Trump it was an important lesson to learn, and he observed that following a big loss – due, among other reasons, to a loss of focus – he actually became much more successful than he had previously been. One of the most dangerous traps is hubris (“everything I touch turns to gold”), and this is true for highly successful entrepreneurs more than for others.
So is a high level of intelligence a key prerequisite for entrepreneurial success? The authors answer this question by distinguishing between seven different types of intelligence, following the theory of multiple intelligences developed by Harvard professor Howard Gardner:

While the term “interpersonal intelligence” refers to be capacity to communicate with others, the term “intrapersonal intelligence” means the ability to communicate with yourself (p. 41). It is precisely this type of intelligence that the authors credit with the key to entrepreneurial success. “People who possess this kind of intelligence have control of their own thoughts” (p. 41). To me, this clearly makes sense, not least because an entrepreneur must have the ability, more so than an employee, to scrutinise himself and realise that he is heading down the wrong path. He needs to keep correcting himself because no one else will do it for him. If he fails to do so, the market will do the correcting by punishing him.
Finally, the authors emphasise the decisiveness of creating a brand value by properly positioning your company – and yourself. Even if you take a critical view of Donald Trump, you have to admit that he made a smash success of it. He certainly is a master of self-marketing. And this is why I would have added that your communication and self-marketing skills count among your key characteristics as an entrepreneur, and that they are instrumental for successful branding. Celebrities like Richard Branson, Larry Ellison or Steve Jobs are good cases in point.

Conclusion: For entrepreneurs, there is ample food for thought in this book, encouraging them to think about the reasons underlying entrepreneurial success and about the hazards that ultimately lay the axe to the ambitions of most start-up entrepreneurs. R.Z.