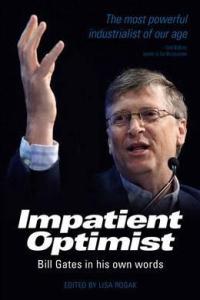 This is simply a book with a plethora of quotes by Bill Gates. The arrangement of the quotes has struck me as odd, because they are alphabetically ordered by headline rather than being grouped into subject areas. But browsing through the collection will be worth your while, especially if you are an entrepreneur or an executive, because you will find ample food for thought.

Very much to the point, I thought, were those of Bill Gates’ statements that suggest a company should never become complacent and never rest on its laurels, but should talk about its errors rather than its merits. Here are some quotes on the subject:

“There is a tendency in companies to let good news travel fast. Oh, we just won this account. Oh, things went so well. But, the thing about good news is, it’s generally not actionable … Bad news, on the other hand, is actionable. This customer is not very happy. This competitor is doing something very well. This project is behind … The sooner you get the bad news, the better off you’re going to be, in order to kind of absorb it, to change your product plan, to go back and talk to the people, really dig into it.” (p. 22)

“Your most unhappy customers are your greatest source of learning.” (p. 27)

“We never waste a lot of time talking about what we’re doing well. It just isn’t our culture. Every meeting is about ‘Sure, we won in seven of the categories, but what about the eighth category?’” (p. 50)

“I’ve always been hardcore about looking at what we did wrong. We’re not known for reflecting back on the things that went well. We can be pretty brutal about the parts that don’t do well.” (p. 55)

“We’ve never had a culture where we say, ‘Boy, we’re in great shape,’ because we know how dynamic the industry really is. We know we have to replace our products in a dramatic way.” (p. 89)

“There is plenty of challenge, which is why it’s good we’re not a culture that looks back and has to waste a lot of time celebrating what we have done well.” (p. 89)

“We’re always thinking about what we have missed that could keep us on top.” (p. 91)

These quotes were of particular relevance for me because I believe that one of the key secrets to corporate success is not to be content with your achievements and to become arrogant, but to keep hunting for areas in which you could be better. For anyone concerned, doing so is obviously less pleasant than revelling in your accomplishments. But it is the most important guarantee for long-term success. One of the chapters in my own book Dare to be Different and Grow Rich is headlined “Dissatisfaction as a Driving Force.” Had I known about these quotes at the time, they would have perfectly complemented that chapter.

Another important secret of Microsoft’s success was that the company preferred to recruit its trainees after their graduation from college or university rather than taking them over from other companies where they were likely to have been “tainted” by adopting a different approach. “Our hiring was always focused on people right out of school. We had a few key hires like Charles Simonyi who came in with experience. But most of our developers, we decided that we wanted them to come with clear minds, not polluted by some other approach, to learn the way that we liked to develop software, and to put the kind of energy into it that we thought was key” (p. 68). R.Z.