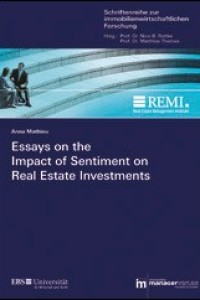 That sentiments and – occasionally irrational – emotions have a stronger influence on the performance of stocks than should be the case according to the theory of an efficient capital market has long counted among the established research findings, and it is an insight particularly obvious when taking a behaviourist approach. In the real estate sector, however, it is an angle that has been more or less neglected so far. So it was definitely an issue waiting to be researched.

The first of the volume’s three essays discusses the “impact of individual and institutional investor sentiment on REIT returns.” The second essay examines the extent to which the sentiment among institutional investors defines the volatility and the return on equity and indirect property investments in an extraordinary market situation, specifically the onset of the financial crisis in 2007. To this end, the author compares the impact on US-REITs with that on the S&P 500 and on the NASDAQ index. This third essay finally seeks to answer the question how the sentiment of private investors, especially the consumer climate, has influenced the number of single-family homes sold in the United States. So while the first two chapters deal with indirect real estate investments (REITs), the last one takes a closer look at direct real estate investments.

The theory underpinning the analyses is the so-called “noise trader theory” (p. 12+). The objective of this theory is to find explanations for market anomalies – such as excessive volatility, for instance. The author argues that a group of investors, namely the so-called “noise traders,” are influenced less by fundamental investment criteria but rather by irrational “noisy” market sentiment. “Noise traders’ decisions to buy, sell, or hold an asset are based on a ‚noisy’ signal” (p. 12). Critics of the approach have objected by saying that, while such anomalies and irrationally acting “noise traders” may very well exist, their actions are compensated by the counteraction of arbitrage-driven investors, so that the rash behaviour of the maverick investors ultimately have no major ramifications for the market (p. 13). The author dismisses the objection by citing evidence to the contrary: “The risk aversion and the short time horizon of arbitrageurs in this model limit their willingness to take arbitrary positions and impede the complete elimination of mispricing” (p. 13). The first essay concludes that “individual investor sentiment is a significant factor in explaining REIT returns and REIT return volatilities” (p. 99). Her most amazing finding, though, is that negative market sentiment has a massive impact on returns, whereas the impact of positive sentiment is less pronounced. “Bearish sentiment increases REIT return volatility more than bullish sentiment does” (p. 99).

The book’s second essay compares the ramifications of investor sentiment on the returns of US-REITs, on S&P 500 (meaning, large-cap stocks), and on the NASDAQ (meaning small-cap stocks). Unsurprisingly, the author observes that “the impact of investor sentiment on returns and return volatility is higher during the financial crisis than in a tranquil market environment” (p. 41). Equally unsurprising is the observation “that noise traders’ optimism increases their demand and provides a higher risk premium, which results in a higher return. However, if noise traders are pessimistic, they decrease their demand, lower the risk premium and reduce the return” (p. 101).

It would be great to see this line of research continued by further analyses that take a behaviourist approach to study the real estate investments of private and institutional investors. This doctoral thesis is a good start, but more research in this field is definitely called for. Since real estate markets are less efficient than, for example, equity and bond markets, it would be most interesting to examine the ways in which market sentiment and emotions govern the investment behaviour of private and institutional real estate investors. R.Z.