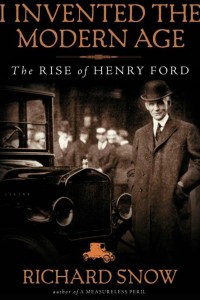 This is a new biography of one of the most important entrepreneurs and inventors of the 20th century, who for a time was also the wealthiest man in the United States. Henry Ford is considered the inventor of industrial mass production, because he made the automobile a mass product in the United States. His legendary “Model T” in particular, of which more than 15 million were sold, made history and changed America. While he received no end of praise for his business acumen and his inventive spirit, however, he was lambasted – understandably so – just as often because of his frequently outlandish and sometimes extreme political notions.

Snow’s biography undertook the task of painting a differentiated picture of the man. Henry Ford launched his career as inventor on the side. His regular job was with Edison Company – run by another famous inventor, Thomas Alva Edison. He began to invent the car in his spare time. In 1899 he gave up his regular job to form his first company, and he quit just when he was about to promoted, as he worried that he would no longer have the time to tinker (p. 72). His first company proved a flop, and had to be dissolved after selling less than a dozen cars (p. 77).

Ford began to make a name for himself as driver of his “Model A,” winning a major car race with it in 1903. Unlike other inventors of his day, Ford was less the craftsman than the inspiring provider of ideas who knew how to delegate chores. “I never saw Mr. Ford make anything”, said one of his early assistants. “He was always doing the directing” (p. 49). From the start, his main ambition was to build cars of very light weight. “The most beautiful things in the world are those from which all excess weight has been eliminated” (p. 53).

Above all, he wanted to engineer a car that was far cheaper than those of his competitors. At the time, cars were luxury items for the fabulously well-to-do. Cars cost many times as much as a family home, and in some cases several millions in today’s money (p. 135). Expressed in the prices of the time (1906), half of the cars in the United States cost between 3,000 and 5,000 dollars. Ford clashed with investors who sought to commit themselves in the same market segment, because he wanted to build a care that cost just one tenth of this sum. But history proved him right: Ten years later, only two percent of the cars sold still cost between 3,000 and 5,000 dollars (p. 137).

With the car that he built, Ford tapped an entirely new clientele, the largest there was in the United States of his day – the ordinary farmer. Two cars out of three he sold to farmers. His biographer emphasises the societal ramifications this had for the country: “In a decade, the Model T broke the age-old isolation of the farm” (p. 194). Many former began to take out mortgages on their farms just be able to buy a car (p. 194).

The Model T was more than an automobile brand. As the author takes care to show, it became a legend in the United States. Ford changed little about the car, even though his employees suggested it time and again. When some of his employees developed a successor model and parked it outside his door, he threw a regular fit, as one witness recounts: “He takes his hands out, gets hold of the door, and bang! He ripped the door right off! God! How the man done it, I didn’t know! He jumped in there, and bang goes another door. Bang goes windshield. He jumps over the back seat and starts pounding on the top. He rips the top with the heel of his shoe” (p. 299).

In sync with the price cuts, he raised the wages of his workers, and paid them a minimum wage of five dollars a day, which for many was twice as much as they had made with previous employers. It triggered a veritable onslaught of hands seeking employment at the Ford Motor Company. At the time, the company was mainly owned by investors, and they did not like it a bit that Ford kept lowering prices while raising wages, leaving next to nothing in terms of dividend after investments. They actually filed and won a law suit to coerce Ford to pay them a substantial dividend.
In response, Ford staged a great bluff: He announced that he would leave the company and set up another that would have four or five times as many employees as the 50,000 employees at the Ford Motor Company. His plans for a car that would cost but 250 dollar were already finished, he said (pp. 258-59). Terrified, the shareholders signalled their willingness to sell their shares to Ford. “But by the end of 1919 Henry Ford held the largest company ever in the hands of one person. His operation was worth half a billion dollars, and he owned it as completely as he did his piano and his birdhouses.” (p. 261)

In his public statements, however, Ford did not limit himself to subjects related to mass production, which he had invented, but also expanded on political issues. During World War I, he chartered a liner to sail with a number of high-key celebrities to Europe in order to end the bloodshed. A naive undertaking that predictably failed. From one day to the next, though, he turned from a pacifist into a patriot, vowing to manufacture as many arms as he could for the United States. During the 1920s, Ford published a company paper that included a series titled: “The International Jew: The World’s Problem”. Not until the articles, which were later gathered into a book, was heavily criticised by all and sundry, did he distance himself from his writings and apologise. So the reader of this biography is left with the impression that the ingenious inventor and businessman was also a political hophead who should have kept his opinions on topics other than automobiles and industrial production to himself.

This was not the only peculiar character trait of Henry Ford. A rather harmless affair war the implementation of the “Sociological Department” that investigated the personal circumstances of Ford employees through detailed interviews. Only those who kept their apartments and children clean and got married (after the age of 22) were eligible for a double wage (p. 231). Something very favourably received was a Health Department that took care of workers when ill or injured, and a Legal Department that counselled them, when buying a home, for instance. Not harmless at all, by contrast, was the “Service Department” under the obscure Harry Bennett that took the place of the “Sociological Department” later on. The latter eventually employed 3,000 staff, some of them criminals, who terrorised the workers. Some wondered: “Who invented the Gestapo first? Henry or Adolf?” (p. 311). But Harry Bennett who had built up this apparatus counted among the people closest to Ford, spent long hours with him almost every evening (p. 311) – which does not cast a very flattering light on Ford.

In short, the book leaves you with mixed feelings: Without a doubt, Ford was a brilliant inventor and a brilliant businessman, but at the same time he was definitely a controversial figure, too. Then again, you need to remember that many other charismatic entrepreneurs and inventors, among them Steve Jobs or Bill Gates, often had or have difficult personality structures and extreme behaviour not dissimilar to that of Ford.

The book is neither – as some biographies tend to be – a hagiography that omits problematic aspects or implausibly downplays them, nor is it an overly critical book with a negative bias. You can tell that the author admires the achievements of Ford, but he maintains enough distance to portray the problematic aspects of his personality without glossing them. R.Z.