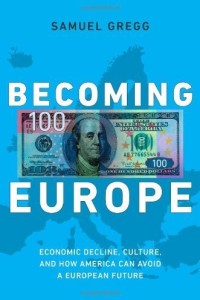 This is one of the best books I have read in recent years. It is a critical account about the present state of Europe, and is meant to serve as a warning to Americans not to keep going down the road of the European welfare state. The differences between Europe and the United States, but also the differences inside Europe, became readily apparent in the findings of a poll conducted in April 2011. GlobeScan, an international public opinion research consultancy, polled the attitude toward a market economy system both in the United States and in Europe, submitting the following statement to the interviewees:

“The free market system and free market economy is the best system on which to base the future of the world.” The percentage to which respondents in the subsequently listed countries agreed completely with the statement differed considerably (pp. 266-67):

If you add the figures for the answers “agreed” and “somewhat agreed,” the results are more positive, with 68% in Germany, 55% in the UK, and 52% in Spain. In France, by contrast 57% of the respondents rejected the notion out of hand.
It is interesting to see the difference in opinion in the United States: Here, 59% of the respondents agreed with the positive statement on a free market economy, meaning twice as many as in Germany and nearly ten times as many as in France.
According to the author, the contrast graphically exemplifies the differences in “economic culture” in Europe, on the one hand, and the United States, on the other. But having made his point, he adds a caveat: Fuelled by the financial crisis, the attitude in the United States is shifting toward the European one. The seemingly impressive 59-percent consent among Americans actually marks a decline from the 80 percent who still felt that way when asked the same question in 2002, just eight years earlier. Among low-income Americans (meaning annual incomes of 20,000 dollars or less), the approval rate declined from 79 percent in 2009 to 45 percent in 2010.

Polls conducted in the United States confirm that the intellectual elites in academia, in the media, and in the legal professions have a far less favourable view of the market economy than Americans collectively speaking. Equally disturbing is that young Americans are more ready to distance themselves from the market system than older ones (p. 11). For the time being, however, the market economy values and the belief in the merits of competition, freedom of contract, and ownership remain much more deeply embedded in American minds than in the minds of Europeans where the idea of “social justice” dominates the political discourse.

Vaclav Klaus, the former President of the Czech Republic, summed up the situation in Europe like this: “It seems that Europeans are not interested in capitalism and free markets and do not understand that their current behavior undermines the very institutions that made their past success possible. They are eager to defend their non-economic freedoms – the easiness, looseness, laxity and permissiveness of modern or post-modern society – but when it comes to their economic freedoms, they are quite indifferent” (p. 268).
The author warns of a development in the United States that could lead to an economic Europeanisation – with all the consequences this would entail. For him, it is above all a matter of political and economic culture, especially the attitude people have vis-à-vis a market economy. America is at a crossroads:

“Do Americans want to embrace modern Europe economic culture? Do they want to live in a set of economic expectations and arrangements that routinely prioritizes economic security over economic liberty; in which the state annually consumes close to 50 percent of gross domestic product; where the ultimate economic resource (i.e. human beings) as ageing and declining in numbers; where the extensive regulation is the norm; and perhaps above all, where economic incentives lie not in hard work, economic creativity, and a willingness to take risks, but rather in access to political power?

Or do Americans want to embrace the opposite? Do they want to live in an economy in which economic entrepreneurship is rewarded; where the government’s economic responsibilities are confined to a number of important but limited functions; and where the stress is upon economic liberty, rather than remorseless efforts to equalize economic outcomes though state action?” (pp. xviii-xix).

Only if you are familiar with Americans’ justified fear of becoming Europeanised will you comprehend the hard ongoing debates in the United States. German media tend to portray Republicans and specifically the so-called Tea Party faction as fanatics upholding absurd political tenets and rejecting the health care reform of President Obama for unfathomable reasons. Reading this book will make you appreciate the resistance against “Obamacare” because it is about much more than socialised medicine: This is about a cultural struggle concerning a paradigmatic shift. According to the author, the term “Europeanisation” has played an increasingly important role in the political debate in the United States. “It is shorthand for describing what people think is happening to America’s economy, from the Bush administration’s heavy spending and fiscal stimulus programs to the acceleration of deficit spending and a general expansion of government economic intervention during President Obama’s. ‘We’re becoming,’ the sentiment runs, ‘like Europe’” (p. 7).

So what would be so bad about that, European will wonder, being quite convinced of the superiority of their system of value and beliefs. In a detailed and erudite analysis of past and present, the author showcases the issues that Europe is up against. The extremely high youth unemployment in the countries of Southern Europe, for example, is one of the results of a highly regulated labour market and the influence of the labour organisers in these countries who represent those who already hold down jobs – at the expense of young people looking for work (pp. 144+). According to the book, 58 percent of the world’s social expenditures are spent in Europe now (p. 159), a feat that would be impossible without heavy borrowing. Of course, sovereign debt is an issue in the United States, too, and rather than being attributable to high military spending alone, it is also caused by the runaway costs of the US welfare state. German readers of the book will rub their eyes in disbelief, but the author cogently elaborates how dramatic the rise in social spending has been in the United States over the past few decades – even if many Europeans have failed to take note because they continue to see the USA as the country of unbridled capitalism, something it has long ceased to be. In 2010, as much as 70.5 percent of public spendings in the US went toward welfare programs – up from just 28.3 percent in 1962, and 48.5 percent in 1990. More than 67 million Americans receive welfare benefits today (p. 185). Conversely, 49.5 percent of all Americans paid no taxes anymore, compared to just 14.8 percent in 1984 (p. 186). (Another book I highly recommend as supplement to this one is William Voegeli’s “Never Enough: America’s Limitless Welfare State” of 2010 from the same publisher. It is one of the books reviewed right here on on www.zitelmanns-book-reviews.com)

The book is not a polemic diatribe but a scientific study focusing on a very well informed historical analysis. At the book’s centre is an effort to understand the “economic culture” of Europe, and to do so against the background of its historic development since the Middle Ages. There have always been two opposing forces at play in Europe, one being market orientation, the other egalitarian statism, as one of the author’s hypotheses has it. The current development, however, is mainly headed in the wrong direction, with the EU integration suggesting more than anything else that “the priorities of Market Europe are being increasingly subordinated to those of Social Europe” (p. 114). R.Z.