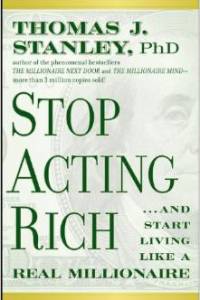 Midway through the 1990s, the US scientists Thomas J. Stanley and William D. Danko surprised their fellow Americans with the book “The Millionaire Next Door,” which quickly made the best seller list. They had interviewed 1000 Americans with an average net worth of 3.7 million dollars, asking them a total of 249 questions. The book they wrote based on their findings showed that the image the media tend to paint of the wealthy as people who spend most of their time consuming luxury goods misses the mark. Rather, the empirical evidence published by the authors provided amazing insights:

Half of the millionaires had never spent more than 399 dollars on a suit, and 75 percent never more than 599 dollars.

Half of the millionaires had never spent more than 140 dollars on a pair of shoes, and 75 percent never more than 199 dollars.

Half of the millionaires had never spent more than 235 dollars on a watch, and 75 percent never more than 1125 dollars.

Half of the millionaires had at no point in their lives spent more than 29,000 dollars on a car, and 95 percent never more than 69,000 dollars.

Now, in his book “Stop Acting Rich,” Thomas J. Stanley presents the findings of new polls he conducted in recent years. He found that 99 percent of the interviewed millionaires had neither bought nor leased a car of the following makes during the past ten years: Aston Martin, Lamborghini, Lotus, Ferrari, Rolls Royce, Bentley. 79.1 percent had not bought or leased a BMW, 78.9 no Lexus, and 75.1 percent no Mercedes (p. 181). The most popular car of US millionaires was not a luxury car at all, but a regular model Ford (p. 203).

He also asked the millionaires how much they spent on wine when having friends or neighbours over. Nine out of ten paid no more than 26.34 dollars for a bottle of wine. In fact, whenever they bought the wine for themselves, they tended to spend much less (pp. 153-54). And in their favourite restaurants, 95 percent spent 40 dollars or less on their meals (p. 157).

However, there are considerable differences in the group between the high income earners and the very affluent. Stanley distinguishes between the “income statement affluent” (meaning, people spending conspicuously while neglecting to build up a fortune) and the “balance sheet affluent” who are very effective at building a fortune (p. 17). Stanley proposes an empirical formula to identify the group you belong to: Take 10 percent of your age, and multiply it with your annual income, and you get the net wealth to be expected. A person who is 58 year old and makes 100,000 euros a year, for example, should thus have a net worth of 580,000 euros (pp. 17+).

Interesting to note: The group of the “balance sheet affluent,” which represents the 25 percent with the greatest wealth, exceeds the expected asset value by 2.49 times. The person in the above-cited examples would have built up a net worth of 1.44 million euros by the age of 58. The “income statement affluent,” who represent the lower quarter of the net worth scale in this group, achieve on 66.5 percent of the expected wealth – meaning only 379,900 euros in our example.

Either group had the stated goal to “become rich.” Yet each of the groups defined this goal in very different terms: The objective of the “income statement affluent” was to achieve as high a consumer level as possible. The objective of the balance sheet affluent was financial independence (p. 64).

In some professions, the share of consumption-oriented persons is much higher, whereas in others the type that seeks to build up a fortune tends to prevail. Statistically, Stanley shows, it takes 383 high-income-generating physicians or 275 high-income-generating lawyers to produce the equivalent of 100 millionaires, but only 53 farmers (p. 53).

While some say “money won’t make you happy,” others embrace the notion that it does. Who has got it right then? Stanley takes a very differentiated view to distinguish between the two groups above. He asked several hundred affluent Americans who had all been born between 1946 and 1964, and who had all started with a comparable salary. One of the questions he asked these respondents wanted to know how happy they felt with their life overall. They were asked to rate their contentment on a scale from 1 to 5.

The group of the malcontent respondents earned a median income of 203,000 dollars, while the content ones made 307,000 dollars. This was not the key distinction though. The biggest difference between the two groups was their ability to build up wealth over the previous 30 years. The group of the very happy rich had built up a fortune of 1.38 million dollars, the group of the unhappy individuals had saved up 304,000 dollars only. The unhappy ones owned 1.5 times as much as they earned, the happy one 4.5 times as much. The homes in which persons of either group live had more or less the same value (798,000 versus 785,000 dollars; pp. 224-25). The difference was that one group gravitated toward consumption, spending the money they earned in order to afford a very high standard of living. The other group was more frugal, associating wealth not with the acquisition of fancy consumer goods but with financial independence.

So it arguably pays to look harder at the question whether and under what circumstances money contributes to happiness in life. There is no single answer to the question, as it depends essentially on whether those who strive for riches wish to live a life of luxury or whether they seek financial autonomy and security above all. Those in the second group are definitely happier, according to Stanley’s hypothesis. R.Z.