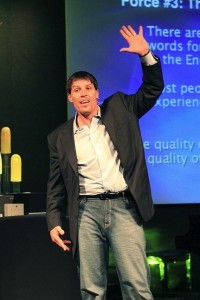 Anthony Robbins is said to be the world’s most successful and best-paid motivational speaker, personal finance instructor, and life coach. He trained a number of top athletes like Andre Agassi or Mike Tyson, among others, and has for several decades taught classes and seminars to thousands of people worldwide. In Germany, speakers such as Jürgen Höller or Bodo Schäfer adopted various of Robbins’ elements for their own classes.

Between 26 and 29 March of this year, I attended his four-day event “Unleash the Power within” in London, and it was the first time that I experienced Robbins first hand. The audience of 7,500 people hailed not just from England but everywhere in Europe, including Germany, the Netherlands, Poland, Russia, Italy, and Spain, among other countries.

My guess is that most attendees were aged between 30 and 50, few of them wearing a suit, and the majority dressed in denims. That said, all age groups were present, from children to elderly people in wheelchairs. What struck me was that about eight out of ten attendees were self-employed or entrepreneurs. I also noted that the gender distribution was balanced. My first acquaintance at the event was a property developer from Manchester with a passion for weight-lifting. Sharing the same interests, we had plenty to talk about.

Robbins’ classes started at nine o’clock in the morning and sometimes did not end until midnight – with few or no breaks in between. Robbins was assisted mainly by one other speaker, Joseph, a close assistant of many years. Robbins does not host the event in person throughout. Instead, video recordings from previous seminars make up roughly half of the event time.

The topics covered during the four days included, for example, professional success, health, and NLP (neuro-linguistic programming). While finding much of what Robbins had to say true and important, I was not exactly stunned by anything, and I suspect others who read a lot of books on the subject of success (like me) felt the same way. Still, I appreciated the four-day seminar as a great opportunity to take a fresh look at certain insights that I may have been aware of but have yet to implement.

I certainly agreed with many of Robbins’ statements. For instance, he emphasised how much depends on the kind of people you surround yourself with: “People’s lives are a direct reflection of the expectations of their peer group.” It was one of my favourite lines, because it shows the importance of setting up a challenging environment for yourself. Robbins also placed a premium on the physical side of things, arguing that it tends to be neglected in the context of mental change processes. He believes that you may quickly alter your mental state by changing your posture, language and facial expression, among other things.

The event was quite unlike any standard seminar I was used to from Germany. In many ways, it resembled a rock concert more than a seminar, with people dancing and frolicking with abandon, always cheered on vociferously by Robbins and his assistant. Hundreds of times, he shouted into the room: “Does it make sense?” and 7,500 people would yell “Yes” back at him while applauding, dancing, singing and having a good time, all of it backed by booming music. Those who stayed in their seats were asked by Joseph to get up and join the revelry – the one excuse he was willing to accept being physical infirmity.

German speakers like Jürgen Höller have borrowed some of these features for their own events. However, while the partying takes up no more than five percent of Höller’s events, they easily accounted for a third of Robbins’ event time on some days. I personally found 30 percent excessive and would gladly settle for 5 percent.

Also, I actually liked his assistant Joseph, an Afro-American from California, better than I liked Robbins himself. While 62 years old, Joseph looks 15 years younger, and is extremely likeable. What displeased me about Robbins was the incessant use of expletives, as he rarely ever phrased a sentence that did not contain the “f-word.” While the insights he shared may be significant, some are well-known and others rather dubious. I learned, for example, that milk and other dairy products are best avoided – but this will not keep me from drinking plenty of milk and eating curd. Day four centred on health and nutrition, and I couldn’t help thinking that Robbins was trying to palm off eccentric and scientifically controversial theories as new-found facts.

My overall impression: If you need time out from your business routine and feel like having four days of good clean fun, this will be just right for you.