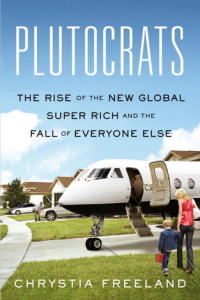 This book is about the one percent – or, to be more accurate, about the 0.1 percent or indeed the 0.01 percent – that constitute the wealthiest individuals on the planet. To get straight to the point: It is a highly recommended book definitely worth reading, containing a plethora of fascinating observations and facts. I am saying this even though I do not agree with the author’s political opinions. While I find her leftist leanings and the conclusions inspired by them debatable, virtually everything she noticed and researched is highly interesting. If you feel the same way, you should simply screen out the politicising spin of the book while reading.

Here, in any way, are the facts underlying the book: in 2011, there were 84,700 ultra-high-net-worth individuals (UHNWIs) in the world, meaning individuals owning net assets worth of $30 million or more. Out of this total, 29,000 owned more than $100 million (p. 35) In 2012, there were 1,226 billionaires worldwide (p. 119). The book is mainly about them – the ways in which they got rich, their attitudes, the things they have in common, and so on. The author conducted in-depth research and “spent more than two decades shadowing the new global super-rich” (p. 4).

So how did the super rich get rich? To make one thing clear from the start: Most of them got rich under their own steam. Forbes magazine classified 840 of the 1,226 people on its 2012 billionaire ranking as “self-made” (p. 45). Moreover, unlike the affluent of the 19th century, many of whom did not (or no longer) work, today’s well-to-do “are largely the working rich” and tend to be very active (p. 42). While the most affluent one percent of American derived but one fifth of their income from paid labour in 1916, that figure had risen threefold to 60 percent by 2004 (p. 43).

The author decries the fact that the gap between rich and poor in the developed countries continues to widen. But she also identifies the underlying causes. “Both globalization and technology have led to the rapid obsolescence of many jobs in the West; they’ve put Western workers in direct competition with low-paid workers in poorer countries; and they’ve generally had a punishing impact on those without the intellect, education, luck, or chutzpah to profit from them: median wages have stagnated, as machines and developing world workers have pushed down the value of the middle-class labor in the West” (p. 4).

The members of the class of super-rich are, as the author readily concedes “hardworking, highly educated, jet-setting meritocrats who feel they are the deserving winners of a tough, worldwide economic competition – and, as a result, have an ambivalent attitude toward those of us who haven’t succeeded quite so spectacularly” (p. 4).

It is perfectly understandable if a less qualified worker in a developed country laments the widening rift between rich and poor. But how do things present themselves if you adopt a global perspective? They will look entirely different: The author is critical of a wealthy person’s observation that she quotes – while I find the point he makes is definitely worth considering and hard to refute: If the transformation of the world economy lifts four people in China and India out of poverty and into the middle class level while one American drops out of the middle class, it is not such a bad bargain. She adds that she heard the CFO of a U.S. technology company make a similar argument: “We demand a higher paycheck than the rest of the world. … So, if you’re going to demand ten times the paycheck, you need to deliver ten times the value. It sounds harsh, but maybe people in the middle class need to decide to take a pay cut” (p. 240). One might want to add that these middle-class representatives would also be well advised to do what many Asians do: make an intense effort in terms of education, continued professional development, and advanced training in order to obtain the skills that are actually needed and well rewarded.

As I said earlier: The author, arguing from a moderately leftist point of view, does not share this view as she deprecates the growing inequality. Yet her sober analysis demonstrates, even to herself, that the main driver of said inequality is globalisation, whose beneficiaries are highly skilled professional whereas the less qualified in the developed world are predictably the losers as often as not.

The biggest winners, she suggests, are currently highly qualified finance industry experts, meaning bankers, hedge fund managers and their ilk. In the 2012 Forbes billionaire ranking, the total of 1,226 billionaires included 77 financiers and 143 investors. Among the 40,000 U.S. Americans with investible assets of more than $30 million – the so-called ultra HNWIs – more than 40 percent worked in finance. And of the 0.1 percent of American at the top of the income distribution in 2004, 18 percent were financiers (p. 119). Moreover, 2004 was the year in which the number of those earning more than $100 million was nine times higher among financial investors on Wall Street than it was among the chief executives of publicly traded non-financial companies. The top twenty-five hedge fund managers taken together seem to have earned more than all five hundred S&P 500 CEOs combined (p. 119).

While these figures may be correct, they represent but a snapshot taken at the peak of the financial boom. I seriously doubt that the situation will be the same ten years hence. Neither do I believe that the dominance of the finance industry in its present form is a phenomenon of permanence.

The book goes on about the global super-elites, especially the well-to-do in the United States, Russia, India and China. But what do these actually have in common aside from their enormous wealth and their preference for certain hotels and holiday resorts? The author shows that many in India and Russia got rich in the wake of privatisations – as often as not through graft. “Influencing that one-off division of the spoils was one of the surest ways to join today’s global super-elite” (p. 194). It is an observation, by the way, that is not at all suitable to back a critique of the capitalist system. The author herself admits that “the state, after all, was in charge of privatization” (p. 194).

But can you really put the ruthless behaviour of Russian oligarchs operating on the margins of legality or openly outside of it on a level with the brilliance of inventors and entrepreneurs like Bill Gates, Steve Jobs, Michael Dell, Mark Zuckerberg, Larry Page, and Jeff Bezos who went on to become billionaires? And what do these brilliant entrepreneurs and inventors have in common with the higher echelons of the Communist Party of China who managed to convert political clout into enormous wealth? I personally see no common ground here except the fact that all of them are fabulously well to do.

Take China, for instance: The top seventy members of the National People’s Congress in China added $11.5 billion to their combined net worth in 2011 alone, bringing their total net assets to $89.8 billion. This gain in net worth of the 70 top-earning Chinese legislators exceeds the total net worth of all 660 members of the three federal branches of the U.S. Government by more than 50 percent in 2011, whose net work totalled $7.5 billion that same year (pp. 203-04). “In a state-capitalist system like China’s, making money by being close to the state isn’t an exception to the rules or a violation of them – it is how the system really works” (p. 206).
This means that the skill set necessary to prosper economically in a system like Russia’s or China’s radically differs from the skills you need to accumulate wealth in countries like the United States or Germany. From my point of view, these discrepancies outweigh the commonalities which are more or less limited to comparable account balances or to the inclusion in one of the Forbes rankings.

Conclusion: Even if the author’s political assessments – for instance, her lament over growing inequality – are hard to follow, this book is an excellent read and should definitely be on your short-list.